In a society where the past, present and future meet and intermingle, it appears possible to me to redefine the statue-like sculpture by integrating the notion of time which generates an overall result.

Hailing from a generation influenced by cinema and contemporary media expressions where time sequences come together to form a fictitious reality projected into a different space-time, I wanted to materialize this time which moves on and remains immobile by using rows/lines. 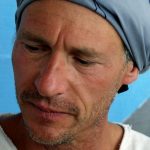 As a child, André Domon was fascinated by all the paintings and arabesques painted on the walls of his father’s church. At the age of twelve he started his first artistic attempt by copying some Canadian contemporary art painters such as Riopel. Subsequently, he enrolled in a school specialized in plastic arts at the age of twelve.

At the age of seventeen, his father died; and as a result, André left everything behind and moved five thousand kilometres away from home to Vancouver Canada, wherein he started his own life and worked as a painter and decorator to earn his living.

Back in Montreal with is young family, he built a country house and enrolled in college for management, which he abandoned to return to plastic arts for six years and graduated from the University of Quebec in 1991. He continued working as a painter and decorator and he developed his artistic skills to an extent where he became a reference in restoration of decorative art and sculpture in heritage buildings.

Travelling each year around the world since the 80’s, always learning more about mankind and contemporary arts; he transformed his French Canadian citizenship into a world citizen.

Since 1991, André Domon has produced many monumental contemporary art sculptures, mainly through international symposiums around the world. 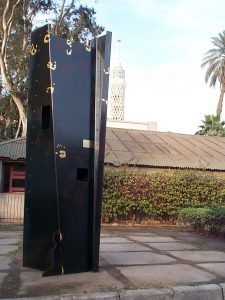 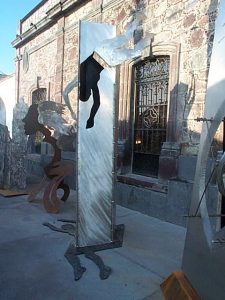